The popularity of heirloom fruits and vegetables is much deserved; their flavor, variety, and beauty are clearly superior. But there are also other compelling reasons to preserve heirloom edibles, and they have serious implications for our future.

Organizations such as Seed Savers Exchange are dedicated to actively preserving the legacy of heirloom plants by operating a seed bank and a heritage farm for propagation. Most important, however, is their large grassroots membership of local gardeners and farmers that continue to grow and save seeds of heirloom edible fruits and vegetables:


"The genetic diversity of the world's food crops is eroding at an unprecedented and accelerating rate. The vegetables and fruits currently being lost are the result of thousands of years of adaptation and selection in diverse ecological niches around the world.
Each variety is genetically unique and has developed resistance to the diseases and pests with which it evolved. Plant breeders use the old varieties to breed resistance into modern crops that are constantly being attacked by rapidly evolving diseases and pests. Without these infusions of genetic diversity, food production is at risk from epidemics and infestations.” - Seed Savers Exchange

The Evolution of Localized Seed
Over the history of human agriculture, food plants became adapted to specific regions as they were nurtured, propagated, shared, and passed on through generations to preserve their special flavors and unique attributes. No matter where people have been born and raised, they all lovingly recall favorite foods that they dearly miss after moving from their home regions, and whenever possible they brought their food plants with them. At a minimum, this is the definition of heirloom seeds and plants.

Some sources define heirloom plants by the age of the particular cultivar, that is, how long ago the plant type came into existence, ranging from 50 to over 100 years ago. But the most important point is that they must be open pollinated, which means that they can be propagated through their seeds and that they are adaptable to different regions by growing them and selecting the plants that thrive and produce well under local conditions.
This dynamic quality is possible due to the genetic diversity retained by the plant, and this is a critical advantage in creating new adaptable varieties that have disease resistance, tolerance to either heat or cold, or the amount of water necessary for successful cultivation, and so on. They are also known for their unsurpassed range of flavors.

In contrast, hybrid plants, those that have been purposefully crossed under controlled conditions to select for commercially advantageous traits such as color, durability under transport, high production, etc., have lost genetic diversity and are dependent on high fertilizer input, the use of pesticides and herbicides, and the seeds are either sterile or do not breed true. Hybrids began to be used extensively at around 1945, the end of World War II, and during the 1970’s the distribution of hybrid seeds was firmly established by commercial seed companies.

To grow hybrid varieties of vegetables or fruit you must depend on a commercial supplier for the seeds or seedlings, not on seeds saved by your grandparent or neighbor. This industrialization of agriculture has had a profound effect on farmers, and has limited the types of vegetables and fruits available to consumers. The proliferation of farmer’s markets across the nation is an attempt to regain access to the wonderful array of edibles not available in supermarkets, because they are grown on a small scale, and many are grown using organic practices.

Gardeners Help Preserve Our Agricultural Heritage
Organizations such as Seed Savers Exchange are dedicated to actively preserving the legacy of heirloom plants by operating a seed bank and a heritage farm for propagation. Most important, however, is their large grassroots membership of gardeners and farmers nationwide that continue to grow and save seeds of heirloom edible fruits and vegetables, and they also share them with other growers.

The sharing piece is critical- the ultimate goal is to keep these cultural gems in cultivation.

Each variety is genetically unique and has developed resistance to the diseases and pests with which it evolved. They also become locally adapted (referred to as a land race). Plant breeders use the old varieties to breed resistance into modern crops that are constantly being attacked by rapidly evolving diseases and pests. Without access to this genetic diversity, food production is at risk from epidemics of plant diseases and infestations.
Seed Exchange members are listed in a database and offer their seeds to other gardeners for a small fee to cover shipping. There are literally thousands of varieties with interesting stories, and some are known only as “My grandmother’s sweet pepper“.
Members can also join the Citizen Science Corps (formally known as the Member-Grower Evaluation Network (M-GEN)) and volunteer to grow plant varieties from the collection in order to provide valuable information on how the variety grows in their region.

For the home gardener there is a wealth of delicious and fascinating heirloom vegetables to discover; these are the holders of our diverse cultures, linking us to all humanity around the globe. 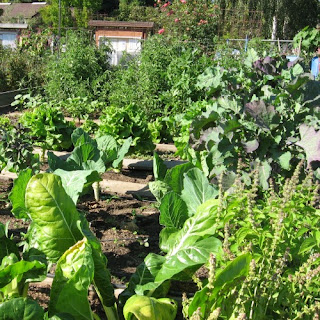 It's planting time - this season plant a little extra to donate to your local food bank. In my city of Mountain View, CA go to the Community Services Agency with your home grown fresh produce, including herbs. You'll make a lot of people happy and healthy!

Growing food is a fundamental human activity and part of our social legacy that leads naturally  to sharing the abundance with our neighbors. Planting extra edibles and donating the surplus for those in need is not only a simple way for gardeners to contribute to alleviating hunger, but it's also a way to feel a real connection to your community.
If you have any space at all to grow vegetables or fruit, you can have a significant impact on not only reducing hunger, but also on promoting better nutrition. Fresh fruits and vegetables are expensive when you are struggling to make ends meet and feed your family, but they are essential for better health and proper nutrition. All that is required is that you grow a little extra and donate what you don't need to your local food bank. 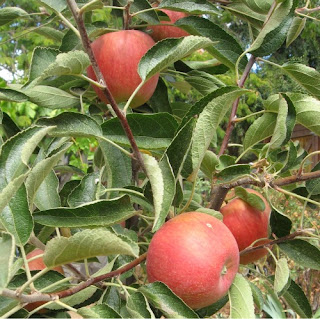 As our economy continues to flounder, and the number of people who go hungry increases each day, local produce grown from your backyard garden can make a big difference in the lives of others. Food banks, public service agencies, and charities are reaching out to the public to get donations of fresh produce to distribute to the hungry, and the home gardener plays a key role. In addition to suburban gardens, community and school gardens and even company gardens can make produce donation a special part of their gardening programs.
How to Share Your Harvest
Programs such as "Plant a Row for the Hungry", started by the Garden Writers Association (GWA) as a public service project, highlight that there are over 84 million households in the USA that have yards or gardens, and if each of them planted just one extra row of vegetables and donated the produce to their local food bank or other service agency, significant progress would be made towards reducing hunger.
The GWA provides guidance and support on how start a program at the local level. There are now numerous local Plant a Row for the Hungry projects throughout the country, and to date over 14 million pounds of produce has been donated by gardeners.

At the Community Services Agency (CSA) in Mountain View California, on average over 200 people a day shop at the agency’s Food and Nutrition Center for food to supplement what they and their families have to eat. The most popular items are fresh fruit and vegetables, and often there are not enough of these to distribute. Even donations of fresh herbs are welcome, and most gardeners have an abundance of prolific herbs (oregano, thyme, mint, basil, etc.). 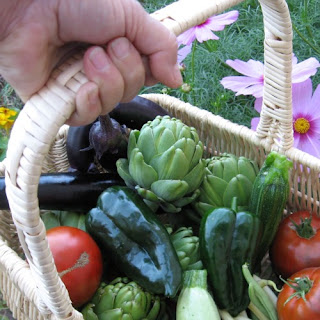 We recently brought a big box of Meyer lemons from our large tree and bundles of freshly cut organic herbs to the Community Services Agency in Silicon Valley. As we laid our donations out several people immediately began taking handfuls of fragrant herbs and seemed most delighted to have them. It was very obvious that fresh produce is very much in need and appreciated.
The Second Harvest Food Bank of Santa Clara and San Mateo Counties also  requests donations of produce, which they distribute to other food distribution agencies:
"By sharing fresh fruits and vegetables lovingly grown in the backyard, the community can help nourish their neighbors in need."
They have also partnered with Village Harvest, an organization of volunteers that will come to your house and harvest surplus fruit from your trees for donation to food banks.

Gardeners not only have the power to  transform their local urban and suburban ecosystems into thriving habitats while growing food, we also have the power for transformative social good. Most gardeners would be happy to contribute their surplus garden produce to feed the hungry, but the challenge is raising awareness about this simple but critical act of caring for the poor that makes an enormous difference in the health and nutrition in our local communities.
Find your local food bank today and get the most out of growing your own food – share it with others!

This post was published on Ecolocalizer
Posted by urban artichoke at 5:48 PM No comments: