How to Prune Your Blackberries 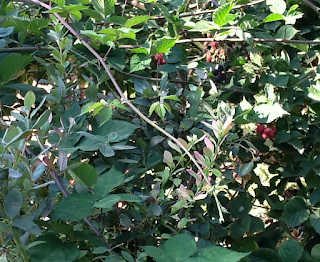 Pruning your berry bushes can seem like a daunting task, but it doesn't have to be complicated. That's what I learned recently when I joined experienced horticulturalist Debbie Stern, head gardener for Rosiland Creasy, to lend a helping hand, but mostly to learn.

Since most berries are vigorous growers and will happily spread wherever they are planted, the ideal is to keep them under control from the beginning. I've been hesitant to plant any because of the potential for a berry take-over of my garden. But I got over my berry fear by learning hands-on how it's done.

See below for the basics you need to know and the four-step pruning method:


Pruning Cane Fruits - the Basics
In general, cane fruits (also known as bramble berries) such as blackberries, raspberries and hybrid berries, are pruned by cutting the canes down to the ground after they have finished fruiting.

New fruit is produced from new canes, so you must be careful to identify which canes haven't fruited, and save those for next year's crop of berries. If you wait to prune in late fall or in winter, you'll be sure to get the all of berries for the season.

Exception: for "everbearing"raspberries that fruit in summer and fall, then again the next spring, you only prune the top of the canes that have fruited, because those canes will be the spring fruting canes. Refer to:  Edible Landscaping, Rosiland Creasy, 2010.

If you can, take advantage of the thornless cultivars of blackberries, such as Black Satin, Arapahoe, Apache and Navaho. Black Stain is the variety in these photos, and a favorite of Rosiland Creasy.

You might recognize the colorful wall below from photos in Creasy's excellent book on edible landscaping. The are kept well under control in her front yard (below) by yearly pruning and produce lots of luscious berries.


Pruning Blackberries in Four Steps
By pruning the canes every year and digging out any suckering canes, and uprooting any that have rooted when they touch the ground, the berries can be prevented from unwanted spreading.

Read through all of the steps first before beginning:
1. Find the fruited canes by looking for signs of fruiting (you'll see where the berries were attached and have been harvested, or find old berries the weren't harvested) and cut the cane by several feet.

2.  Find each cane that you cut and trace it back down to the ground; cut it off at the ground. Do this for all of the fruited canes. Be careful not to damage tender non-fruited canes, as they're usually all tangled together.

3. You should now have only canes that have new growth and no sign of fruiting; they are usually very green and supple. Choose three healthy canes to leave for next year's berry crop. Pick canes that are not too thin, but not too old and thick either so that they will develop vigorously.


4. Cut down to the ground and remove all non-fruited canes except the three that you picked. Tie these onto your trellis using twine in a figure-eight loop to create a little space between the trellis and the cane. Done!

From just three canes you will get lush growth. You may be tempted to leave more, but it may lead to more work than you planned for next fall to untangle and prune your berries. Experiment and see how your particular berries grow.

Posted by urban artichoke at 11:55 AM